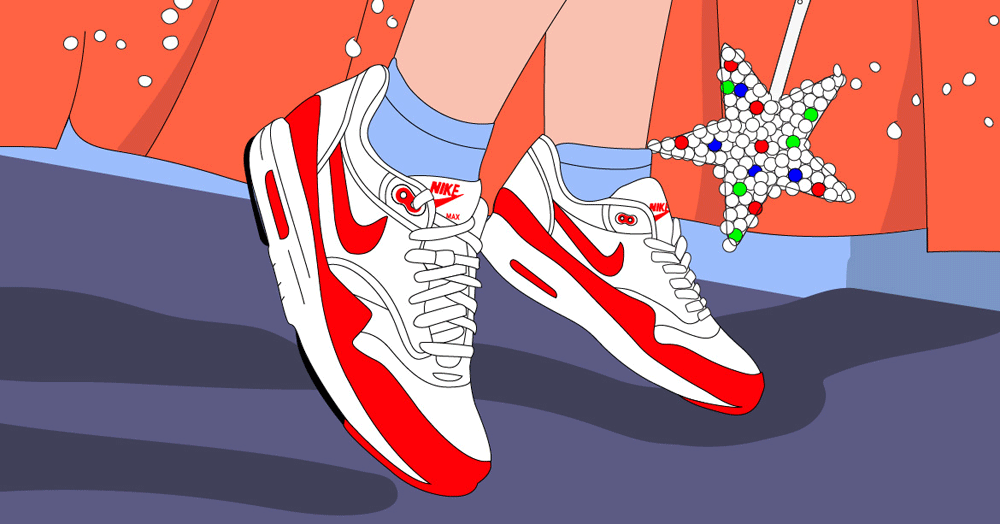 So, what do Kanye, Beyonce and Sam Cam all have in common then? Believe it or not, they’ve all worn Air Max!

Invented in 1987 by legendary designer Tinker Hatfield and inspired by the Centre Georges Pompidou in Paris, the Nike Air Max is more than just another pair of trainers, they’re a symbol of game changing design and construction. With over 70 models they’re one of Nike’s best selling styles and have been worn by practically everyone!

So, to celebrate their 30th birthday on March 26th Stylight decided to recreate a selection of famous film shoe moments with Air Max’s most popular models… 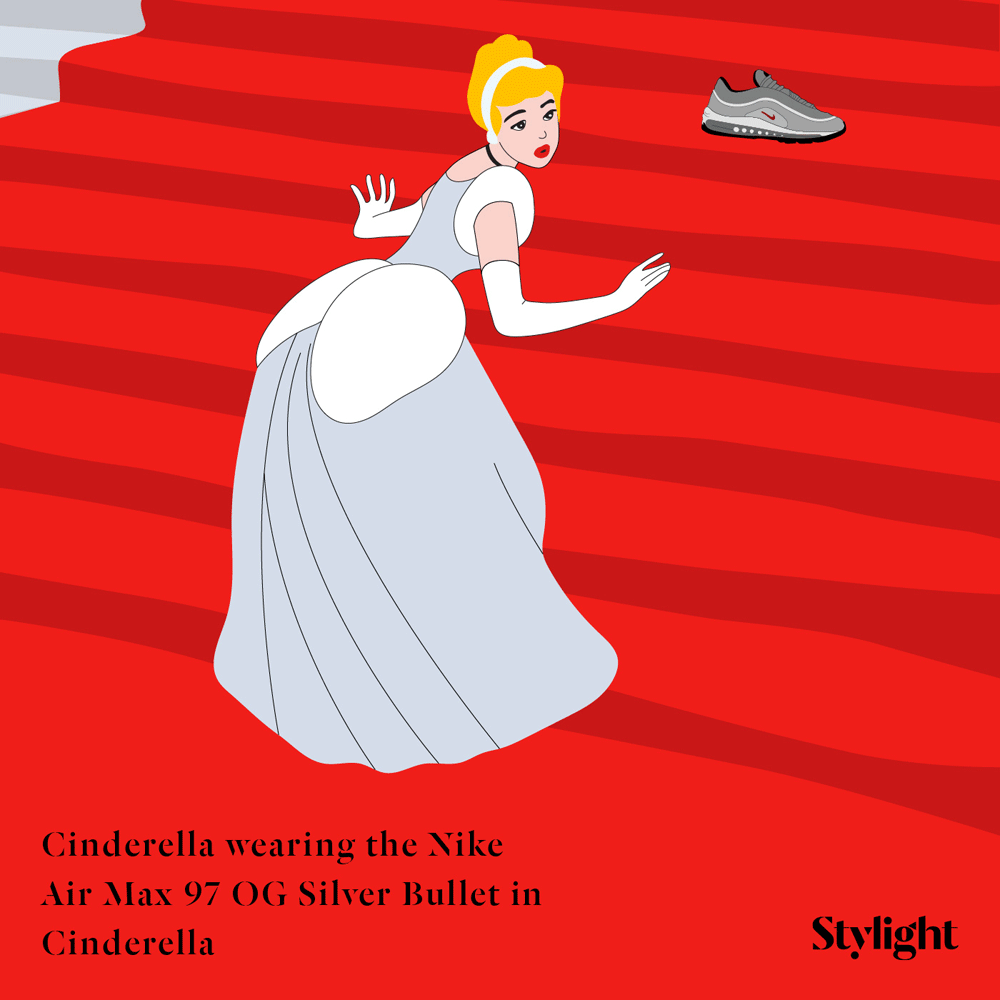 Arguably one of *the* most famous scenes in movie history to include shoes has to be Cinderella. In fact, her glass slippers practically deserve their own character credit! Such an iconic moment deserves equally iconic Air Max so we reworked the scene with the Nike Air Max 97 OG QS in silver natch. These trainers are a must cop for any Air Max fan and have recently had a fashionable resurgence as they were spotted on multiple editors and tastemakers at the FW17 shows.

Next up has gotta be Dorothy’s red glittery shoes from The Wizard of Oz of course! These shoes are unmissable so we’ve replaced them with the most famous style of Air Max, the 1 OG in red (what else?!) Harking back to early Air Max days, these trainers feature classic styling, a sleek visible air bubble and bright colourway. Click your Air Max together three times. 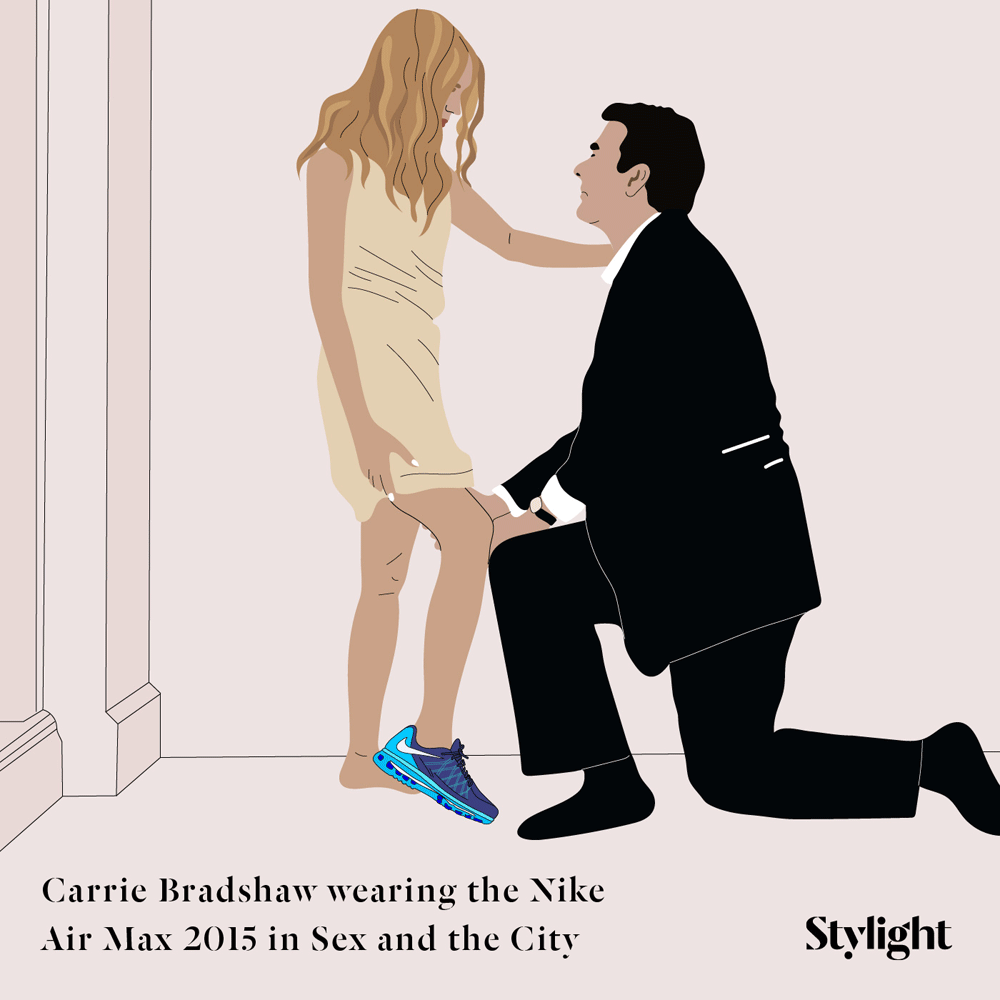 Move over Manolos, we want to be proposed to with Air Max! When Big famously proposed to Carrie in the Sex and The City movie her blue Manolo Blahnik’s took centre stage. Sticking with the blue theme we’ve replaced the heels with a pair of Nike Air Max 2015 in electric blue. ‘I Do!’ 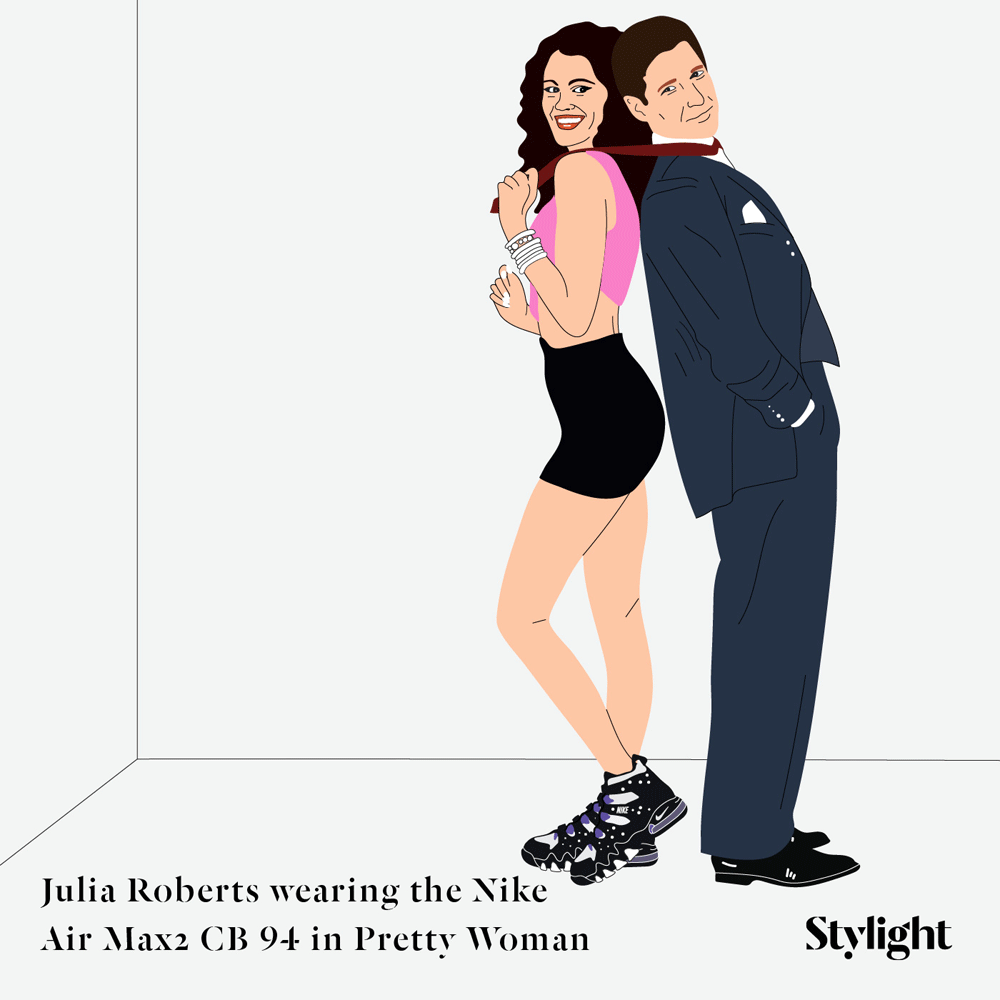 There’s no movie we love more than 1990’s Pretty Woman and our favourite part…? Obviously Vivian’s killer OTK vinyl boots. Nobody does boots like Vivian played by Julia Roberts, so in keeping with the theme we’ve given her a pair of Air Max ‘boots’ – the Nike Air Max2 CB 94. Worn by celebrated NBA basketball player Charles Barkley, these Air Max were a massive hit in the 90’s, the ‘road’ edition features this black, white and purple colourway. We wonder what Edward Lewis would think?! 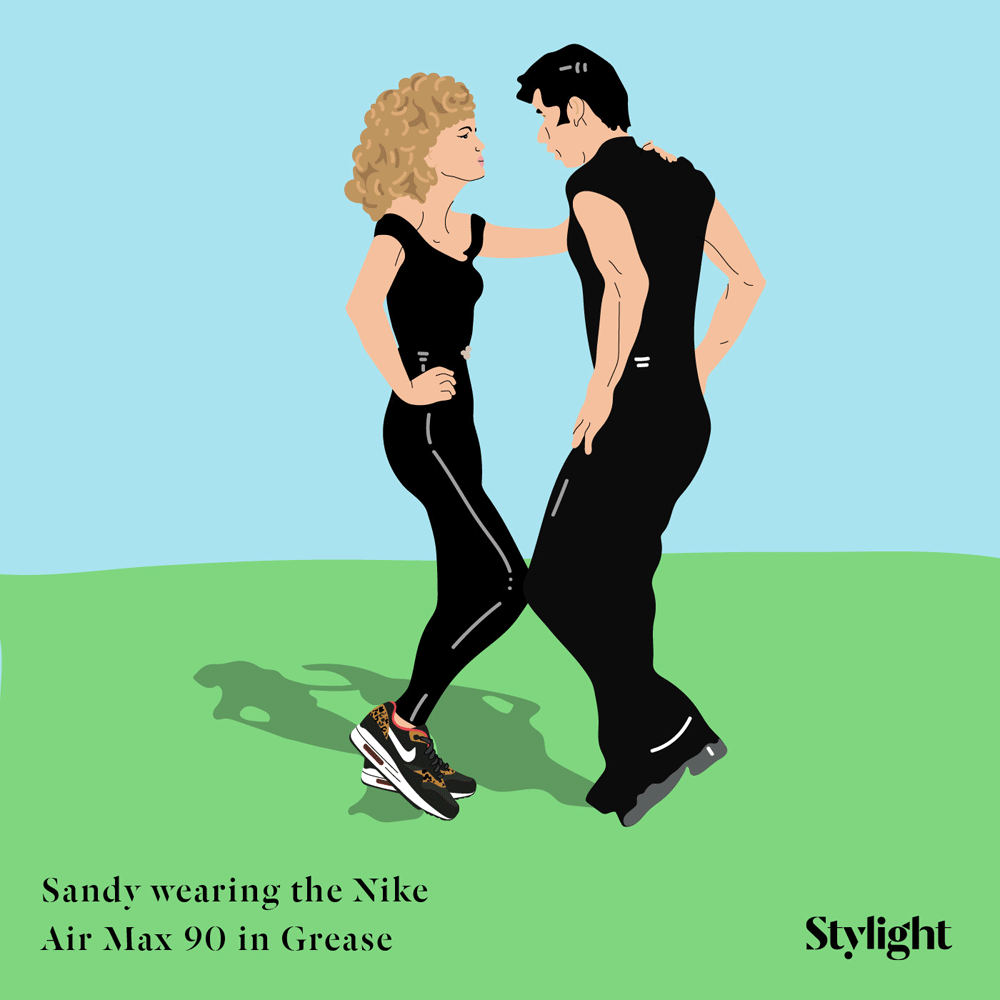 Nike Air Max 90, you’re the one that I want! This scene from Grease will go down in history as one of the most famous musical scenes in a movie, it even went down as one of the best selling singles of all time selling over 15 million copies worldwide. Sandy’s shoes are the focus of the song as she pushes Danny, played by John Travolta, over with a pair of hot red mules. We’ve now replaced these with equally sassy Air Max, the 90 in leopard print with a hot pink inner. Tell me about it, stud! 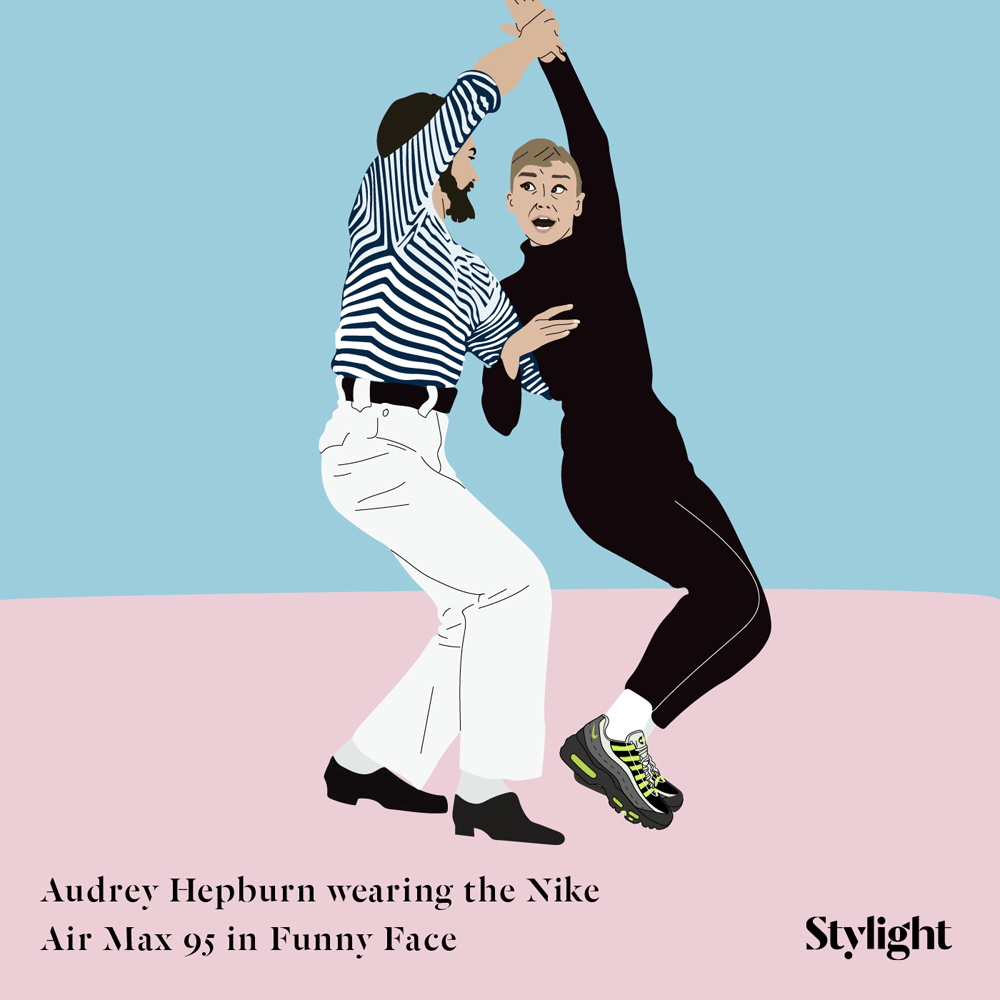 1957’s musical romantic comedy Funny Face is most memorable for Audrey Hepburn’s energetic Bohemian dance with Fred Astaire. The dance has been referenced throughout history in numerous iterations, most famously by Beyoncé in her video for Countdown. Hepburn wears classic flat loafers teamed with white socks for the dance, we’ve kept the socks but swapped the loafers for Air Max 95, a classic Air Max inspired by human anatomy, which were predominantly made for athletes (like Audrey in this crazy dance!)

So, from Dorothy’s iconic red slippers, Carrie’s Monolos and Audrey’s black loafers Stylight have certainly proved that the Air Max has the power to suit every outfit, person and situation! Which is your favourite?