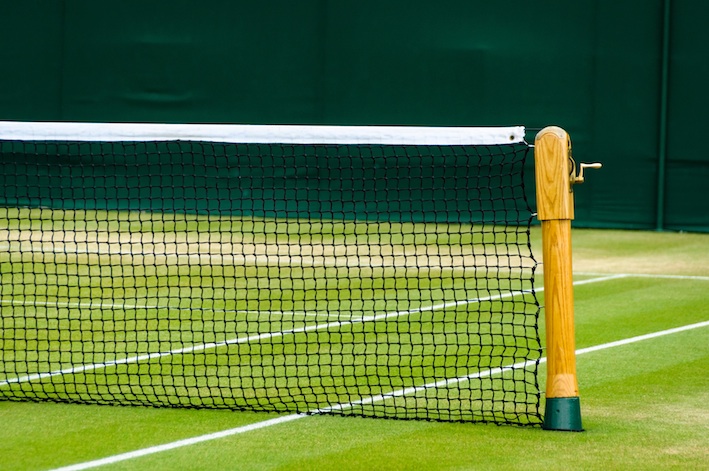 It’s that time of year again when the university tennis courts are filling up, the weather’s getting hotter (albeit with the odd downpour thrown in for good measure) and home-grown strawberries have started appearing on the supermarket shelves – yes, that’s right, Wimbledon fortnight is just around the corner.

But before all eyes turn to SW19, there’s the little matter of the French Open in Paris to get out the way first. The pre-tournament qualification matches kicked off on the clay courts of Roland-Garros on Tuesday 19 May, with the tournament proper starting on Sunday 24 May and ending two weeks later.

In the men’s competition, King of Clay Rafael Nadal has won nine out of the last ten French Open titles, but his form hasn’t been nearly as good as that of Novak Djokovic so far this year. The Serbian world number one has already bagged the Australian Open and four Masters titles in 2015 (including two final triumphs against Andy Murray), so could this be the year we see an end to Nadal’s dominance on the Parisian clay?

If you want to get the French Open look ready for hitting the courts, or just want to get into the spirit of the event while watching ITV4’s coverage from the comfort of your sofa, then check out the range of stylish Lacoste clobber – from Ts, polos and hoodies to shorts, trainers and jackets – available from Mainline Menswear.

You can check out the full range of Lacoste menswear at mainlinemenswear.co.uk

Monday 29 June will see the 129th Wimbledon Championships kicking off a week later than usual this year, to allow the players an extra week to recover from their exertions at the French Open and to give them longer to adjust to playing on grass. 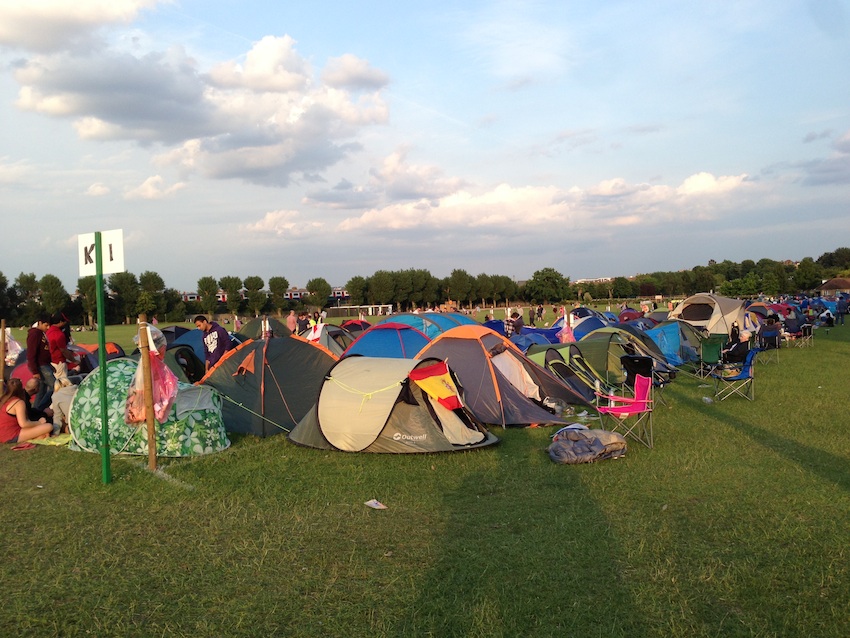 The deadline for applying for tickets through the annual public ballot has long since past, but if you fancy going along, you can always join ‘The Queue‘ for one of the many on-day tickets available: 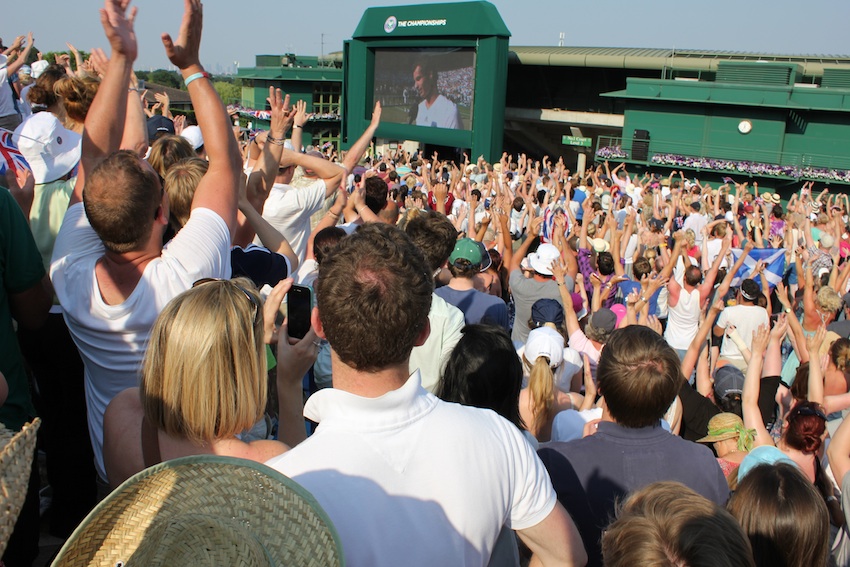 Fans on Henman Hill cheer Andy Murray to victory in 2013

And if you can’t wait until the action kicks off at the All England Lawn Tennis Club – or can’t afford the cost of a ticket – you can always check out the Wimbledon Qualifying Tournament at the Bank of England Sports Centre in nearby Roehampton. The other three Grand Slams hold their qualifying tournament on site, but due to Wimbledon being played on grass, which is a rather fragile surface, it isn’t possible to hold another tournament at the AELTC the week before the main event.

The Qualifying Tournament is completely free to watch, and is a great way to get warmed up for Wimbledon and see some up-and-coming tennis stars of the future playing up close and personal.

There is a wide array of temporary jobs available during The Championships, which are ideal for students who have just finished their exams and want to earn a bit of cash at the beginning of the summer break. Most, if not all, of the positions will have been filled for this year’s tournament, but it’s well worth checking out what’s available if you fancy working there next year:

FMC Ltd is the official caterer to The Championships, and they employ approximately 1,800 staff in a variety of roles during the Wimbledon fortnight. These include managers, chefs, team support, food service assistants, silver service, plate waiting and bar staff. Staff are required for the dates of The Championships and for a set-up period beforehand. Hours of work and pay vary from role to role, with FMC Ltd looking for ‘bright, sociable and enthusiastic individuals who enjoy the challenge and satisfaction of creating a memorable occasion for our guests’.

You can find out more from FMC Ltd’s website.

LSS is the provider of housekeeping and court attendance services at both the Qualifying Tournament and The Championships. A range of roles are available from May through to August, including supervisors, administrators, team leaders, lift attendants, court attendants, buggy drivers, cloakroom attendants, day housekeepers and night housekeepers. Shifts are available for the pre-event period, the Qualifying Tournament, The Championships and the post-event period.

There are a number of vacancies for data collectors to collect match statistics during The Championships. Candidates must have a passion for, and an excellent knowledge of, tennis, together with plenty of playing experience. Applicants should also have excellent communication skills, self-confidence and the ability to work effectively under pressure.

Visit jtcwim.co.uk to find out more and complete an online application form.

G4S Security Services (UK) is the official provider of security to The Championships. You can find out more from G4S.com.

The Wimbledon Shop requires retail assistants and team leaders to work in its outlets during The Championships. Previous experience of working in a retail environment or in any customer service role is desirable, but not essential. Candidates should enjoy working with people and the challenge of working in a busy environment. Assessment sessions are held in the spring each year, so applications have therefore now closed for 2015.

Visit Wimbledon.com for an overview of these and other casual work opportunities at The Championships. 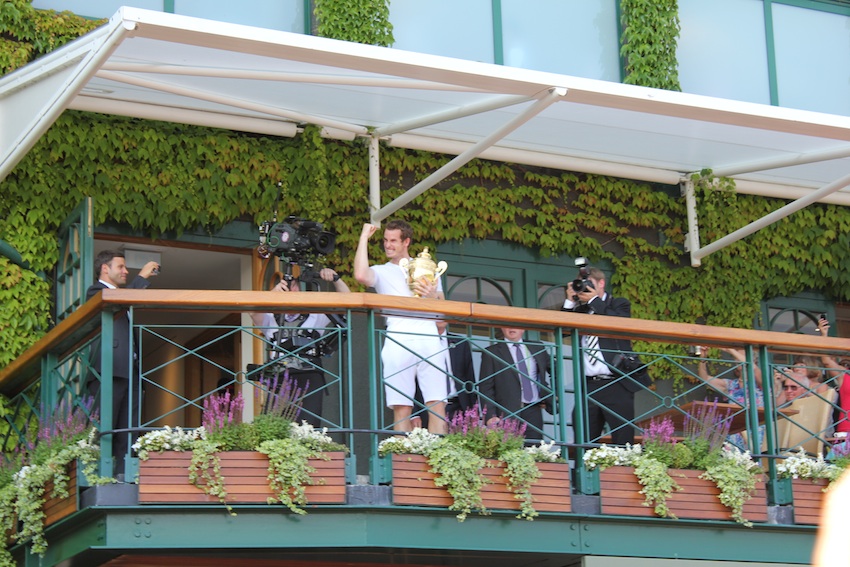 Will the 2015 Championships see a repeat performance of Andy Murray’s 2013 Clubhouse balcony celebrations?