Lady Gaga turned the big Three-Oh on the 28 March, and whilst for many this milestone birthday induces a major freak out, when it comes to Ms Stefani Germanotta the fear of not having accomplished enough can be easily put aside.

The fashion chameleon can safely say she’s ticked off most bucket list checklists, from wearing a dress made of meat to earning over 20 awards including Grammys, a Golden Globe and even an Oscar. In addition to this, she’s broken multiple Guinness World Records and has a role in FX’s ever popular American Horror Story. But perhaps what she’s most popular for is her ever-evolving eccentric style, and nothing has changed more than her hair and makeup looks. So, to celebrate her 30th, Stylight have compiled 30 of her most iconic hairstyles… 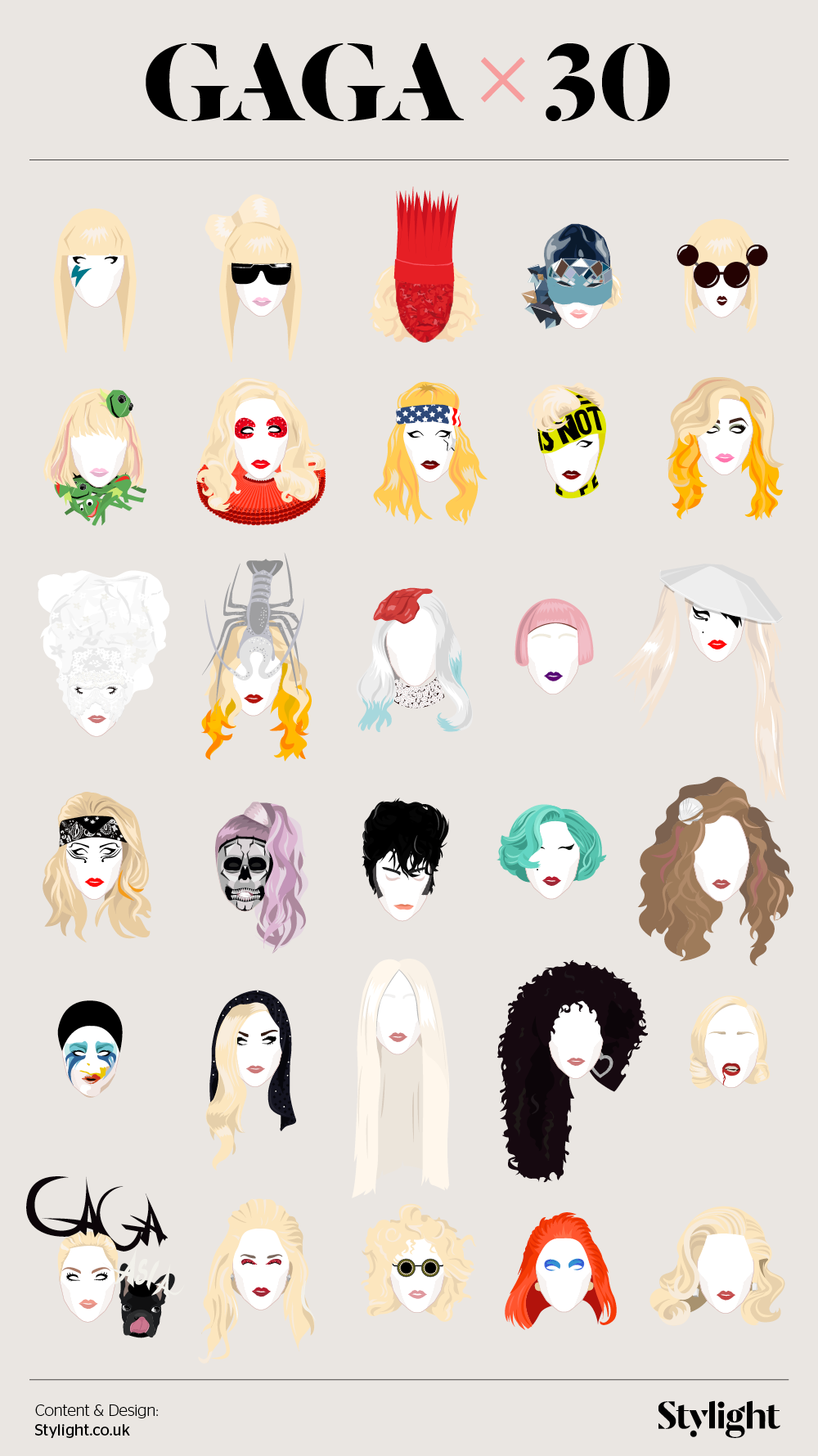 Gaga began playing the piano when she was just four years old and is now a classically trained pianist. She started to perform in New York music clubs at the age of 18, and after working her way up, mass popularity arrived in 2008, with the release of the album The Fame. She writes or co-writes most of her songs, but doesn’t consider herself to be just a musician, she’s also willing to embody her music, turning into a living piece of art. As she stated in a CBS News interview in 2011: ‘I am a true academic when it comes to music, and when it comes to my style, my fashion. There’s nothing that I’ve ever put on my body, that I didn’t understand where it came from, the reference of it, who inspired it. There’s always some sort of a story or concept that I am telling.’ In 2013 Time magazine readers chose her as the second most influential person of the last decade and she was honored as Woman of the Year 2015 by Billboard.

Gaga’s theatrical looks were a huge contributing factor to the success of her career: her love for Bowie is evident, with a lightning bolt crossing her face in her video for Just Dance. She’s also responsible for turning hair bows into a ‘thing’, with Youtube bursting with tutorials on how to recreate the style. Gaga’s love for incredible masks and Alexander McQueen creations is also no secret: the red lace mask she wore at the VMAs in 2009 being the perfect example.

Lady Gaga has also always been a big advocate of gay rights and gender identity equality: in 2010 she created a male alter ego: Jo Calderone, and appeared, in male clothing on the cover of Vogue Hommes Japan. She also appeared on the March 2011 cover of Vogue sporting a sharp pink bob with bleached eyebrows. With the release of her third album Art Pop in 2013, she turned her face into a canvas, covering it with colourful makeup and face paint. In 2009 she sported an unforgettable Kermit inspired outfit whilst appearing in the Thanksgiving TV special Lady Gaga and the Muppets’ Holiday Spectacular. In 2014 she was the face of the H&M Christmas campaign duetting with Tony Bennett whilst wearing a Cher inspired look, with massive black curly hair.

2016 kicked off to a cracking start for Ms Germanotta, who was awarded a Golden Globe for Best Actress in a TV movie for her role as The Countess in American Horror Story: the Hotel. In January she landed the cover of V Magazine (which comprised 16 different shots with her dog and fiancee). After performing the National Anthem at the Super Bowl, she made an epic fashion and music tribute to David Bowie at this year’s Grammy Awards and delivered an emotional performance of ‘Til it happens to you during the Oscars ceremony and on this occasion she went for a distinctly more classic with a retro-inspired, curly hairdo.

Which is your favourite Gaga look?